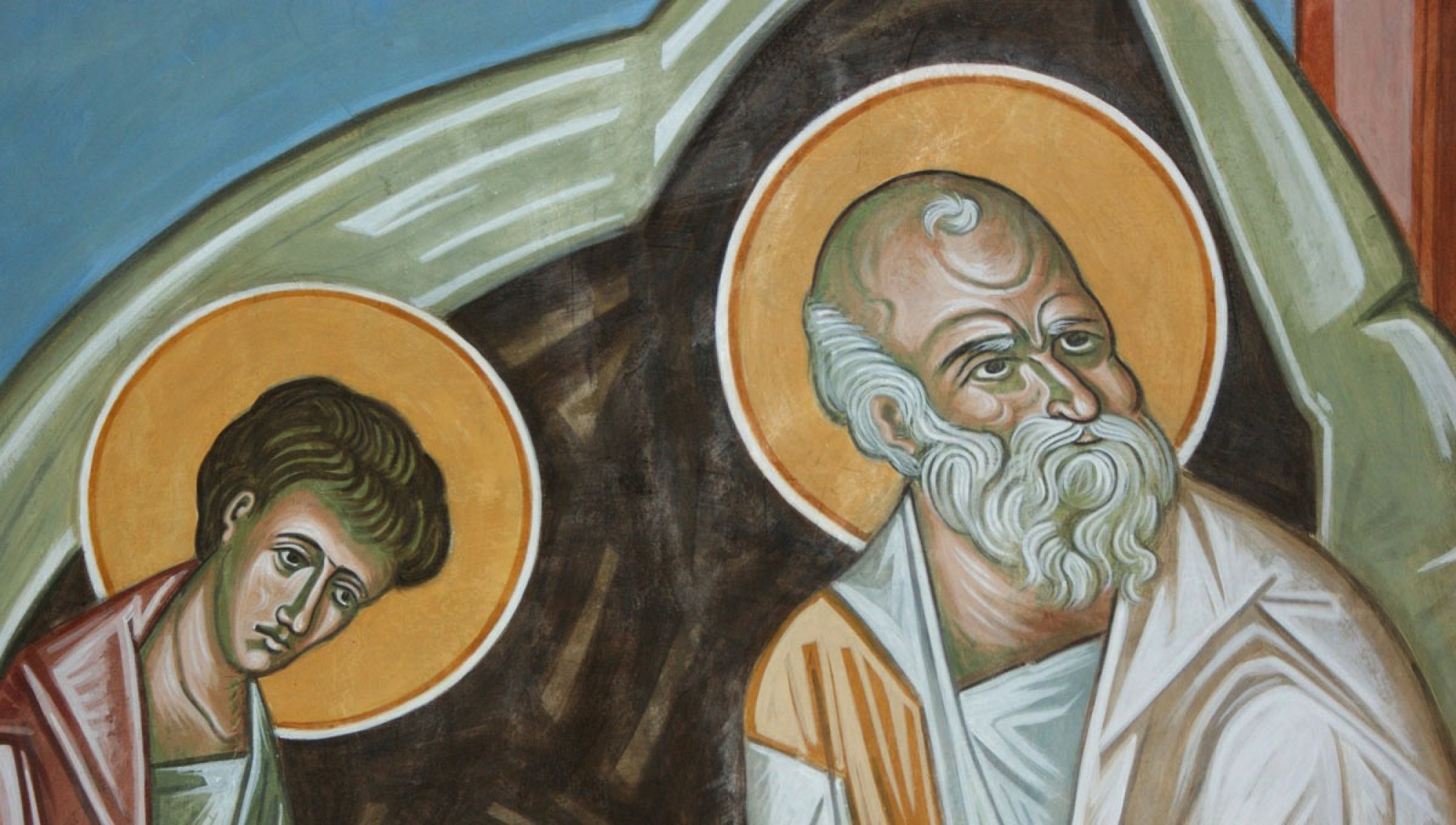 Markos Kampanis religious work and commissions depict his effort to pair the tradition of Byzantine culture with the aesthetics of Modern art. He has been working on murals, icons and book illustrations.

His relationship with the community and art of Mount Athos, the painterly approach of which was presented on Part 1, played a decisive role in his interest towards religious art.

The admiration and understanding he has towards Byzantine culture together with his knowledge of the modern art movements, led him to the production of liturgical works of art that convey ecclesiastical needs in a contemporary way. He tried to paint within the framework of tradition without relying on a simplistic copying of older archetypes.

During 2010 the Byzantine Museum in Athens staged a retrospective exhibition of all his work relating to Mount Athos.

The late director of the Museum, Dimitris Konstantios, had characterized him as one of the innovators of religious painting since as he pointed out “Markos Kampanis based firmly on the tradition, doesn't imitate it but creates a personal painting style”

The most important mural commissions undertaken, include murals in the convent of Virgin Mary Portaitissa in Kornofolia, Evros (a dependency of the Athonite monastery of Iveron), in the monastery of Saint Katherine on Mount Sinai, in the monasteries of Vatopaidi and Simonos Petra on Mount Athos, as well as on smaller establishments and chapels.

Much of his work has been used as illustrations or book covers for publications. The most important are his illustrations for the New Synaxaristis printed by Indiktos Publishers and the illustrated life of Saint Simon the Athonite, founder of the monastery of Simonos Petra.

An interview with the artist was published at the Orthodox Arts Journal. You may read it online.

You may view two short videos concerning the mural for the icon of Virgin Mary Portaitissa (Our Lady of the Gate) or see Markos Kampanis painting the main vault mural at the same monastery, here.

MARKOS KAMPANIS is an artist, born in Athens in 1955. He has studied painting in London at Saint Martin’s School of Art. He works as a painter, print maker, book illustrator and church-mural artist.

He has had many one man group shows of his paintings in Greece and elsewhere.

His major exhibitions were held at Ora Gallery, Athens Art Gallery, Chrysothemis Gallery, Cultural Foundation of the National Bank of Greece, French Institute of Thessaloniki, Gallery K in London. During 2010 the Byzantine Museum in Athens staged the retrospective exhibition “Painting on Mount Athos, 1990-2008” presenting his Athonite paintings of that period. An exhibition “The Museum of Trees” was shown during 2011 and centred on the depiction of trees throughout Art History. His exhibition “365” in 2013 was the result of a project where one painting was created for every single day for the length of a year.

His appreciation of Byzantine Art drove him towards religious art, including murals at Vatopaidi, Iveron and Simonos Petra monasteries of Mt.Athos, the Monastery of St. Katherine on Mt. Sinai and private chapels.

He is a curator of The Mount Athos Art Archives dealing with contemporary artistic production related to the Holy Mountain and the history of Athonite printmaking. In that capacity he has set up a printmaking studio on Mount Athos, he has edited a book on the Mt. Athos paintings of Spyros Papaloukas and has curated the exhibition “Mt. Athos in Contemporary Greek Art” for the Cultural Foundation of the National Bank of Greece.

**Cover image:  Saint John the Evangelist and his pupil Prohoros. Detail from a mural at the convent of Virgin Mary, a dependency of Iveron Monastery in Kornofolia in Evros, Greece. The mural of the Christ Pantokrator with the Evangelists was painted in 2015 with casein and egg emulsion on the central church vault.